In the twilight of a time

In the darkest hour

Whispers begin to tell of a figure emerging from the darkness

A being without a name, faceless and obscure

As if the very force they describe has existed for eons

Disobedience, non-compliance spread among the people

At first fearful, then defiant, as the legend grows

Whispers turned to cries and the cries into screams

To empower the music of the people

In this place at about this time

You got two turntables and a microphone

Even if it makes you blind

In a land scarred by divisions, separated by borders, armed with nothing but vinyl, you are a DJ. Music brought us together, only to tear us apart- moving from region to region, you bring the music of the people to the people, sowing seeds of discontent, propagating rebellion, and bringing people together.

Cut up records like a samurai warrior as you move through the regions of what used to be a country, before he divided us, before we divided ourselves: from the Heartland to Isle Neon, Mt. Rock to The AM and Urbania.

Leave your fists at home, violence is for suckers.

In order to download this game you must purchase it at or above the minimum price of $1.05 USD. You will get access to the following files: 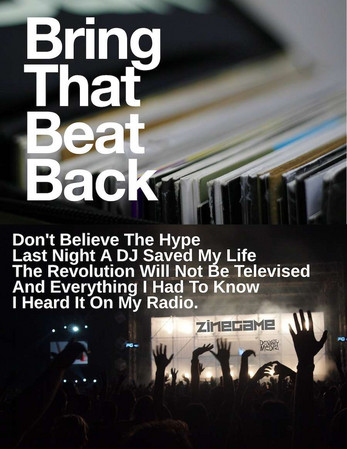