Growing up, my friends and I inserted ourselves into our favorite stories. Sailor Moon, Pokemon, Legend of Zelda, Redwall...we had our own original characters for all of these properties, and so many more. Characters we put time, energy, love, and thought into creating. Characters that meant a lot to us, because they were a part of us, but also better: maybe stronger or smarter or older or braver.

I think anyone who engages with media and pop culture, especially when you engage as a kid, is bound to create an original character or two. And these characters are great, because they help establish your understanding of a literary world and of storytelling.

But there’s this tendency online where, when a female-presenting person does this and presents their character online, their character is usually treated with disdain. The character is called “unrealistic,”  or “wish fulfillment”--and these might be true statements, but when has fiction ever had to be about realism? There’s nothing wrong with wanting to be a part of your favorite franchise, or to be better than you see yourself in real life.

Mary Sue is a dirty word almost entirely because of the internet. It became a way to push girls down and tell them their ideas were stupid and overpowered and “unrealistic.”

So instead of treating the term “Mary Sue” repressively, my game embraces everything that makes Mary Sues great and fun.

This game is about the perfections of a character, about making them as overpowered and ludicrous as possible. You and your friends will work cooperatively to create a Mary Sue and determine incredibly important things (like their hairstyle, their special powers, their unique feature, and the genre they come from) using a D12, a character sheet, and a little creativity. The sillier, the more over-the-top, the better!

This is a game about empowering yourself to make those characters you used to make when you were 5 or 8 or 13 years old, and to do so entirely without shame.  This is the party game Let’s Make a Mary Sue!

Because, truly, the best thing about making an original character (do not steal) is making it! 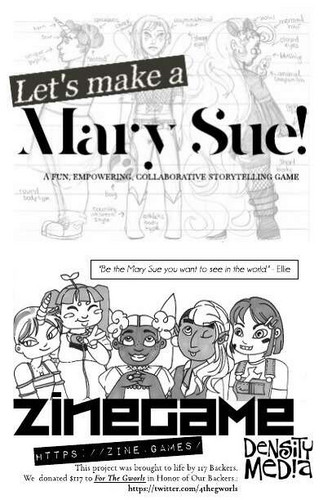